… and the usual-unusual touring in Tuscany did not end here but rather turned into a desperate gem-hunting spree to avoid the guide-book’s top ten and get lost off-road.

Being the middle of nowhere in this seems-to-be far away town of Comano quickly came the realization that our one night accommodation was the best pick, totally matching the concept of the trip. With 800 inhabitants the small town did not feel like a mass-tourism paradise but it satisfied our desires to the utmost. Hotel Miramonti in the high Tuscan area run by an utterly kind local family brings in personalized service, attention to detail and great cuisine a traveler would be looking for. The 3-star’s rooms are simple but comfy, the restaurant is charming and more than local and the view from the terrace is breathtaking. The moment we put ourselves down at one of the free tables for dining we appreciated that we screwed it up an hour before and took the wrong turn towards the overcrowded Viareggio which was originally pinned in our map for a seafood dinner experience. We would have never gotten the service that only these kind of family run places can offer and probably would have to be gone with the ‘today’s special offer tourist menu’ provided there. Instead at Miramonti we had the best ever Tagliatelle and Risotto, the freshest local pork meal and beef-steak, mouth-watering Tiramisú and all this accompanied by home-made wine and the must-have Grappa just for the digestion of course. Despite the size of the town the restaurant was full of locals and stopover bikers making the atmosphere even more pleasant and more difficult for us the next day to say goodbye to the most inviting place I’ve ever experienced before.

Taking the roads down the mountain we headed into the heart of Tuscany to see that ever-praised Tuscan landscape for once and for all. We improvised some left and right, up and down turns finding ourselves in the middle of widely stretching vineyards and sky-high Cypress-trees bringing in no disappointment and a continuous oh-wow sigh.

And here I did something I could have skipped and saved an hour and a half from our limited but rather precious time. I opened a guidebook and spotted the medieval hill town of San Gimignano and with a no-opposition tone I decided and declared we must go there. But others also had guidebooks and we quickly found ourselves stuck in the biggest traffic-jam Tuscany has ever seen, trying to park the car in one of the only-for-pay parking lots losing some 30 minutes with this otherwise easy action. After our parking rampage we headed up to the historical town and passing the medieval walls the spectacle unfolding in front of us was rather something which we could have avoided. Herds but herds of tourists running between herds but herds of tourist-luring shops. No misunderstanding, the town itself is spectacular but was not in-line with our initial travel itinerary. We grabbed a quick coffee from some grumpy fed-up-with-all lady, took out the car and fled to some more intriguing places to finally be only surrounded by nature.

Nuns navigating their way through the crowds of San Gimignano

Reaching our final destination, the Chianti region the roads were leading us to pass by a tiny uphill town surrounded by medieval walls leaving no space to get a sneak-peek inside. We took a left turn, parked the car and walked inside the town where no cars were permitted, no crowds were rolling and the only thing disturbed the tranquility of the place were a few steps on the winging cobble stone streets. So here we were within the walls of a once rather important historical town of Montefioralle populated by less than 80(!) today, offering the only restaurant but that with a panoramic view looking over the great vineyards of the Chianti region. 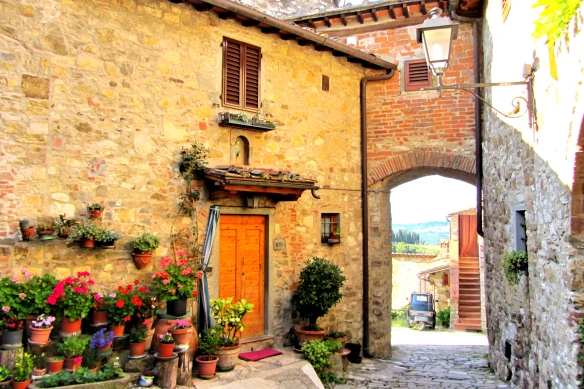 A town only lived by a few – Montefioralle

This we did not plan, did not know, did not see before but definitely put the icing on our instant cake. The cake which came out so stunning and memorable flavored by the small-small moments of exploring some hidden treasures along our way through the ever surprising Tuscan countryside.

11 thoughts on “Instant Tuscany for ‘take-a-way’”