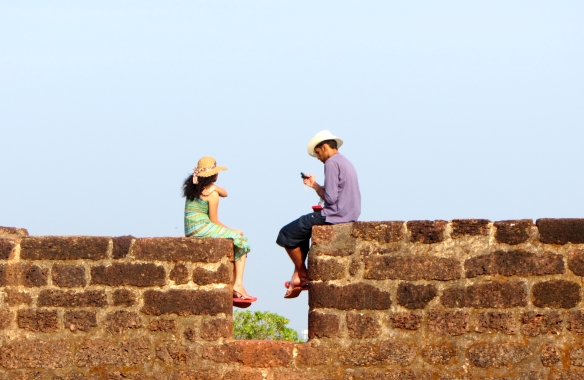 Peak-season travel is not my philosophy. So the idea of riding to Goa just a week before Christmas sounded irrational and incompatible with my journey.

However my rational plans were not coming out as expected so if I wanted to keep on exploring the South I left with no choice other than boarding that seat-less, sleeper-only, 12-hour overnight (and over day) bus from Bangalore with just a single toilet stop during the entire extent of the trip. Well, after the 25th curve and bump I found the only relief in the thought that I possess a cheap flight ticket I managed to get for the return trip on Christmas Eve.

The bus ran into Panjim, the capital of Goa where we were impatiently pushed off by the previously kind and peaceful bus staff. Did we all become a herd of sheep during the night? Within minutes aggressive taxi drivers appeared out of nowhere, boarded the bus, picked up our bags without even asking if we want a ride.

The driver slowly walked back and silently asked, where my travel buddy and I are heading to.

That’s actually triple the normal rack-rate but being peak-season let’s say it’s double. The haggle seemed endless but we managed to find a common ground and two minutes later we were on the way to our apartment in a 20-year old broken down van. Just a fun fact: as soon as the van pulled out of the bus station a countless amount of modern taxis showed up in front of us. Gee, how can I still get cheated in India?

Long story short, the formerly confident driver lost his way twice and after an infinite call with the hotel when we finally arrived he suddenly forgot about our deal and did not want to give back a ‘penny’ of change. Oh, Lord! Poor soul was messing with an overly exhausted traveler who woke up on the wrong side of the bed, so he had no choice and I’m not gonna say anything else…

Did I mention how I feel about peak-season?

Coming up! Beyond trance and Feni shots. Is it North Goa?