It was one of these days when everything turned out to be the way they were meant to be.

My program got cancelled in the last moment so I made an instant decision to travel down to the tiny village of Tiszakürt where that Reformed Church peeks high to the sky so kind to my heart for certain reasons. It was a prominent day in the life of the locals, some came in their Sunday best, some in their everyday best. All from the village and other townships queued up fairly undisciplined to lay their eyes on the ’thing’ the fuss was all about. They might have never seen this before and the younger ones might have not even understood a piece what was going on. Still, they kept on forming the line, fairly undisciplined. All of a sudden five men showed up in the courtyard. However their everyday best was different from the villagers everyday best. Long white mantle and ornate hat. All of them carried a spear and one of them carried a highly royal red velvet pillow with the even more majestic event subject on top. The Saint Crown of Hungary was gliding through the freely left corridor commanding the highest respect that left everyone speechless for a moment. As our eyes tracked its way vanishing from the outside we all felt a little privileged and a little inexplicably uneasy at the same time. 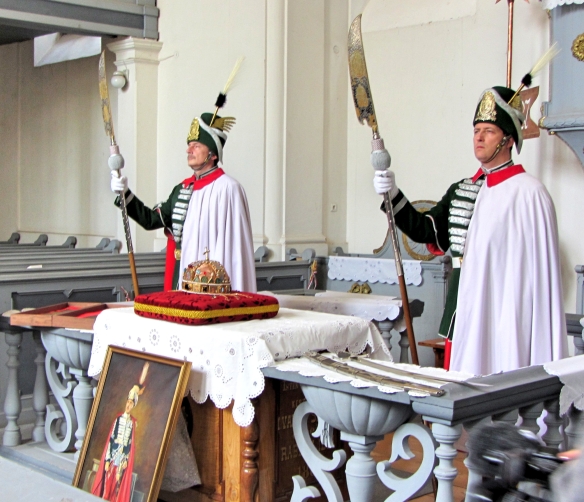 As the crown made its journey into the church all the formerly queuing ones were buzzing around as an anthill in turbulence. Kids first. No, elders first. No, first comes first. It was only one hour given to have a closer peek on the imperial headgear placed in the house of Lord. And what looked like to be a gargantuan mess turned out to be an orderly flock of crowd when they stepped across the threshold. The razzmatazz subsided and suddenly the messy queue started to form the straightest line ever. Girls and boys, young and old slowly and timidly walked through the aisle approaching the royal symbol on the altar. As a little boy got closer he looked at the crown guards rather confused and asked his teacher: ’are they statues’? No, my son – the teacher replied – it is called discipline.